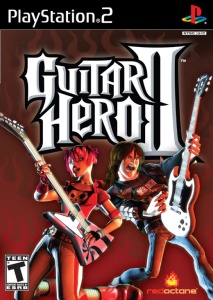 The second Guitar Hero game came out my junior year of college.  I first played it when I was home on break over my then-best friend’s house, and I was terrible at it, but I loved the music choices and it was fun, so I ran out to Best Buy and gathered up all the years’ worth of gift cards my relatives had sent and bought it for our PS2.  I’d never been much of a gamer – my parents forbade them in the house when I was a kid for whatever reason, and I didn’t get my first console until I was a senior in high school.

I don’t really know what it was that kept me going back to Guitar Hero, but I just kept trying to be GOOD at it.  A few of my friends also enjoyed playing, and eventually we sort of had this habit – Dan, a commuter student, would come over in the mid-afternoon the days we had late night classes, and Matt would come visit from the second floor, and we’d play for a few hours before picking up our friend Danny and going out to dinner somewhere off-campus, then go to our late night geology classes.  I got pretty good at Medium, but could never play Hard because my hands were too small.  Eventually I started perfecting songs and unlocking things, and I felt pretty good about it.  I played throughout the summer, but it wasn’t as fun without my friends there.   Lots of things changed for me that summer – more specifically, I started dating again after two years, and I finally got the closure I needed from a few different things.  There was still one thing I needed removed from my life, and Guitar Hero would help me.
My first boyfriend, Eric, was a very involved sort of fellow.  Anything the SGA had their talons in, he tried to get involved.  He was a member of the Japan Club despite not being in Japanese classes, he was a DJ at the radio station, almost singlehandedly re-started the Alpha Phi Omega group on our campus, and was one of the founding members of the school’s gamers club.

He was also incredibly manipulative and abused me.

We were together for just over a year, the entirety of my freshman year, when I discovered that he was cheating on me with my good friend.  This was not the first time he had cheated on me, but it would certainly be the last.  There were so many things I had chosen to ignore, because they surely were normal, that in retrospect, absolutely weren’t.  Then it got weird.

In their defense, most of our mutual friends sided with me, but because we were a unit for the first full year of school, nearly ALL of my friends were friends of his.  I no longer felt comfortable being in spaces with him, which was hard, because he was EVERYWHERE.  I suspected that he followed me places – sophomore year a bunch of my friends and I went into the city to see Dragonforce, and he was there.  Even though tickets had to be specially purchased at a record shop on the highway, and he couldn’t drive.  Another friend had gotten me tickets to see Hot Hot Heat with We Are Scientists and The Redwalls at Starland Ballroom, my favorite venue…and guess who was there?  As far as I could tell, he didn’t even LIKE those bands.  It was just another way to keep track of me.  I could no longer participate in clubs I had once felt comfortable in because of how heavily involved he was, and I went out of my way to avoid him.  I’m pretty sure the only reason he apprenticed at the radio station was because I did, too.  Luckily, our shows were nowhere near each other in the rotation, and Sunday afternoons became my solace.  Junior year I moved entirely across campus to another dorm, and guess who ended up there too?  I couldn’t believe it.

One fateful fire alarm, we ended up running into each other and we got to talking.  I had no intentions of forgiving him, because there is no forgiveness to be given from abuse and infidelity, but I told him that I was tired of living with a chip on my shoulder and that while we would probably never be friends, I’d be civil and I expected the same in return.  It worked, and it was fine.  I still wasn’t done, though.  I still felt like revenge, or at least closure, was something I needed.

That opportunity came within weeks of my senior year.

The thing I loved the most about Guitar Hero was the music selection.  It was predominantly stuff I already listened to, and what I didn’t was new and interesting to me.  There were songs that I loved available for play – the DLC alone had a song from Every Time I Die, one of my favorite bands at the time, as well as regular content from bands and artists I’d known and loved my entire life.  So it made sense that I would want to play as much as I did.  And because I played with friends, it was a bonding experience.  Those guys were some of the best friends I’d ever had, and though we’ve drifted since then (some a bit, others almost entirely) it’s still an incredibly positive memory.

Senior year was off to a good start.  I’d started seeing someone who did wonders for my self-confidence and well being, and I thank him profusely for that – and I was feeling much better about myself as a person.  I was finally starting to heal.  It was early in the semester when I noticed a flyer for the Gamers’ Club Guitar Hero Tournament.  I was walking with my sister at the time, and I turned to her and jokingly said “hey, I should enter that.”  To my surprise, she actually encouraged it.  I didn’t know what to do.  I knew that Eric would probably be there, and I’d have to face him (as much as I didn’t want to) amongst all of the other gamers kids that I no longer knew.  The group had tripled in size since I’d quit years prior, and it was intimidating.

I went back to my dorm that night, waffled a bit, and said “fuck it” and got ready.  I don’t know what posessed me, but I got dressed up as ~*punk rawk*~ as I had in my closet at the time – a black corset top, a black skirt with lots of buckles on it and hot pink trim, hot pink lace arm warmers…and of course, my trusty Converse, because no punk was worth their snot without them.  I boarded a shuttle bus and mentally prepared myself.  I could play the game just fine in front of Dan and Matt, so I could do this.  Couldn’t I?

It took me a long time to get back to normal.  To be able to form meaningful relationships again.  I kinda fell into this pattern of hanging out with terrible people who used me, and the confidence I’d built plummeted.  I made some bad choices, but that summer I started to get back to where I’d been.  I visited old friends, made new ones, and stopped giving a shit what other people thought of me.  There’s nothing scarier than a fat girl with confidence.

I walked into one of the large classrooms at the end of the student center annex – a far cry from the tiny meetings we’d had not three years prior – and was swarmed by people, mostly guys, in front of a large projector screen.  I vaguely remember people stopping to look, mostly because someone unfamiliar had shown up.  An outsider?  Not really.  Most people knew me as Eric’s ex-girlfriend.  I honestly don’t remember if he was there or not.  He had his thumb in every pie at that point, so he may have been off doing some SGA bullshit or something.  Someone had set up their system and hooked it up and set up some kind of bracket system.  I was nervous.  These dudes probably played for hours on Expert and I never progressed past Medium?  Surely I didn’t stand a chance.  The few people I recognized and was friendly with welcomed me in and told me the rules and described how the tournament was going to work.  People would be matched based on ability level, from Easy to Expert, in a single-elimination sort of system.  If you got to a point where your partner was of a higher skill level, the more skilled player would have to play to the highest skill level of their competitor.

All of a sudden, I knew I stood a chance.

The rest of the tournament is kind of a blur.  I remember easily knocking out competitors, especially dudes very miffed that they had to play at Medium, until I was in the top 2.  I had never met my opponent before, but it was clear he had little to no patience for me.  He took one look at me and said “are you SURE you can’t play on Hard?”  Yes.  I am sure.  I wouldn’t have done this if I could play any harder, trust me asshole.  It ended up being best out of three from the bonus songs at the end.  We were tied 1-1 when my competitor picked the final song.

Every Time I Die’s “The New Black.”  Because girls don’t listen to hardcore, right?  Oh how wrong you were.

I ended up winning the whole thing by a landslide.  Turns out that if you’re used to playing on higher levels, it’s actually pretty hard to step back and play the same songs on the easier levels.  The crowd legitimately went wild – I couldn’t believe it.  That was the last interaction I’d have with the gamers club as it stood, and my prize was a $35 gift card to Best Buy.  That went right back the next day to buy Guitar Hero III.  I don’t even remember if I beat that game, but victory was a sweet enough taste.  I think I may be the only Montclair State University Guitar Hero Champion, and that is a title I will gladly hold onto.  The satisfaction was so strong.  I know Eric had practically nothing to do with that night, but I finally felt myself sufficiently moved on.  Closure?  Achieved.

Welcome to Tattooed Trilobite, a pop culture and nostalgia blogozine leaning more towards the girly side of things, run by the one and only Elyse Explosion. I'm a 29-year-old geoscientist from New Jersey. I like pop culture, misplaced nostalgia, neon colors, cosplay, body modifications, music, science (especially rocks), Slurpees and cheese fries.

The Tattooed Trilobite Itself